Why Are Most Cordless Circular Saws Left Handed? When it comes to deciding on whether to go for a left-handed or a right-handed circular saw, this is more of an operational decision rather than a hand orientation decision.

It is likely that you will find a lot of right-handed people with left-handed circular saws. Reason being, these types of circular saws are more efficient in a number of operations.

By the end of this article, you will be able to understand why that is the case and also realize what it really means for a circular saw to be termed as right-handed or left-handed.

It may not be accurate to say that left-handed cordless circular saws are more efficient as compared to the right-handed ones. This is because you could get some of both designs that do not bring out straight cuts.

However, when you introduce the types in line with where the blade is placed and the type of hand the handyman uses, then you will get a clearer overview of the performance.

For a right-handed person, having the blade on the left will mean that one will have a clearer vision of their fingers and on the cut line.

It also means that the portion that the user wants to keep is placed on the internal side.

Why Most Cordless Circular Saws have Blade on the Left Side?

A while back, manufacturers used to build cordless circular saws with blades on the right side for 7-1/4 inch saws while the 6-1/2 inch saws had a left-sided blade.

However, it seems like most of the manufacturers are making more of the left-sided blades as they are the ones that have a higher market.

Many people especially those who are new to using cordless circular saws wonder why this is the case.

Here are 5 reasons that will help you to understand the why of this question.

Using a cordless circular saw with the blade being on the right side means that you will have your right hand on the viewing side. It obviously makes you lean to get a view of the cut line.

If you do not lean over to the right, chances are you will not be able to see the cut line well. This means that your work may not come out as straight.

However, with the blade being on the left, you will be at a more comfortable visibility position. Hence you can easily follow your cutline without having to strain your neck.

A right-sided blade circular saw will need one to always use both hands, especially when the saw is a bit heavy.

This is because the heavy side of the saw is on the outer side, making the saw a bit heavier to use.

This makes it comfortable for the user to use his/her hand because of this support. Also, it is not as efficient to use both the hands because the left hand will come over the cutting blade. Thus, it obscures the cutline which makes cutting things difficult.

When the heavier side of the saw is on the internal side, the user has less weight on the waste side which also means more stability.

The saw also feels lighter and the cutline is also more visible and easy to follow.

All the above features point to the stability of the saw which is an important factor when choosing a circular saw to go with.

Most people find cordless circular saws with blades on the left side more comfortable to use.

Being able to experience comfortability with your working tools is very important. This also reflects on the kind of work that you bring out.

A cordless circular saw’s lifespan is mostly determined by the power of the batteries that come with the saw.

It is ones of the best cordless circular saws you could ever find that is not as costly as the other similar brands. 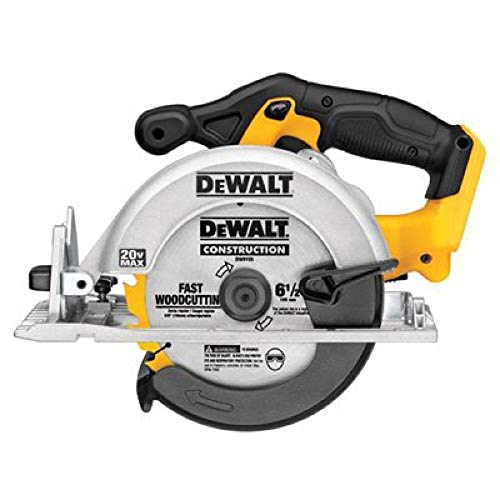 However, if you are not really on a tight budget, the DEWALT DCS577X1 is the most powerful with a 60 Volt 9ah battery. This means a highly powerful and longer lasting saw. 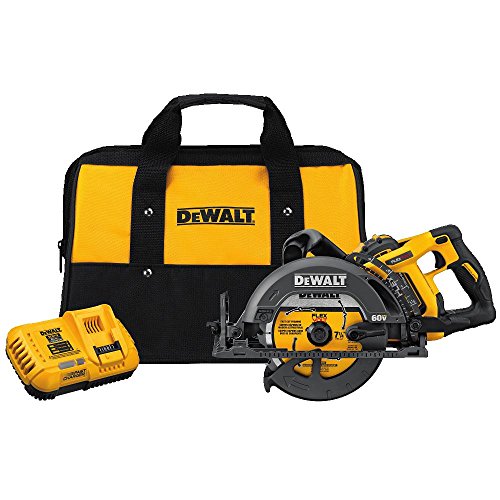 Most cordless circular saws have around 18 to 20 volts batteries which are good and they also come with fast charging chargers as well.

The DEWALT DCS391B is not only a powerful cordless circular saw but also one of the lightest in the market. Say thanks to its magnesium base which makes it as light as 7 pounds including the battery.

However, if you are looking for a powerful saw, then DEWALT DCS577X1 should be your best option.

As much as the left-sided blade circular saws were originally made for left-handed people, they are highly preferred by right-handed users as well.

In most cases, a user would go for both the right-sided blade and the left-sided blade to juggle them between different tasks. A beginner could try out both to see which one works best for them.

However, if you are looking for stability and easy visibility of the cutline, then a cordless circular saw with the blade on the left side is the most recommended option for you.