Home » Woodworking Tools » Saws » Circular Saw vs Miter Saw – What Is The Difference?

Circular Saw vs Miter Saw - What Is The Difference? Before we go into this fully, it is important to know that circular saw can fulfill most requirements at once but it poses limitations to certain points which can be covered up by the miter saw. Now let’s look into the differences first and then we will go a bit more in depth about each of them.

Miter saws require a miter saw stand or a specific table but on the other hand, circular saws need little storage spaces because they are small.

Talking about portability, circular saws are designed to be easily accessible and used especially with the cordless versions. Little or no effort is required transporting this powerful tool to the site of the job. On the other hand, Miter saws are much more difficult to move around compared to circular saws but still less difficult to move around when being compared to table saws.

2. Types of Cut made

Judging from a very professional aspect, the circular saw and the miter saw is definitely two different power tools with different specialized functions. A circular saw is said to be a universal saw, this means it can create a variety of cuts. In other words, it is said to function as a table saw without the tables. With enough mastery and professionalism, circular saws can be used to create even bevel or miter cuts just like how one would do using a miter saw.

On the other hand, the miter saw is made for only one purpose, to make angled cuts. This function compared to circular saws renders the miter saws useless since circular saws can also fulfill that function. I know most of you would ask “then why create or use a miter saw?”. Well, being a specialized tool, this power tool tends to create miter and bevel cuts faster than a circular saw. The problem with circular saws is that the chance for error tends to be so much higher than that of a miter saw and making miter cuts requires so much experience and practice using a circular saw.

3. How do they function?

This is the main distinction between the two saws. The circular saw is better in terms of precision, courtesy of its characteristic rotary motion, allowing it to perform almost all patterns of wood-cutting. The miter saw, on the other hand, is a little more compact and very accurate.

The mitre saw is mostly used to perform crosscuts due to its greater accuracy. You won’t be needing any more guides since the device has been built to have guides. Guides to aid wood-cutting, hence, a perfect result. The saw can be accurately aligned to make perfect cuts. You can also use the miter saw to make wide cuts and also cut a large board without taking much of your time.

In the end, you might still not get something very accurate. The circular saw has a more prominent toothed blade. The characteristics of the blade disc make it difficult to create those rounded curves. This blade factor and the saw’s design also affects the smoothness of the cuts. A fine serrated blade produces finer and pleasant cuts than the more prominent ones.

Looking at the cost of both power tools, there is a slight difference between them. An average miter saw is costlier than an average circular saw but due to a variety of products from different companies, the prices may seem conflicting. A top-notch circular saw might cost more than a normal or standard miter saw. You might actually spend a few more dollars to get a standard miter saw but if you are on a budget, this is still something worth considering.

Regardless of which saw we employ, there is definitely going to be a risk during use. Risk gets higher when we use the saw incorrectly. Various safety precautions are to be taken when using a saw. Generally, circular saws pose more risk, carrying the most percentage of most saw-related incidents. They require a strong hand during use than the miter saws.

There is a high chance of cutting one’s finger or hand if adequate care is not taken. Sometimes, it may get fatal. Hence, it is recommended that you try out the saw on less stressful projects before moving to the demanding ones. Both saws use a moving blade which works in a rotational motion. A miter saw blade is quite safe since it only requires you to align the blade and then push it down to cut through the wood pieces and release it when you’re done.

When to go for each of the Saws?

Knowing when to get each of the tools is crucial especially if you are on a budget.

If your woodwork focuses more on a variety of cuts, then circular saw is your guy. The choice of cuts given by circular saws is much more than that of a miter saw. Almost all woodworkers benefit from a quality circular saw, and this power tool poses to be very useful for the general maintenance of the house/wood shop.

However, if your job requires specialty as well as precise miter/bevel cuts, the miter saw is the guy for the job. An additional advantage boils down to if you have a contract or you tend to make miter cuts on a regular. Circular saws are powerful tools which consist of a flat circular blade that rotates at a very fast speed making it easy to cut plywood, wood, metal and as well as plastics. This type of saw poses as a pretty straightforward power tool which is handheld and can come in cordless models as well as corded models. Being found virtually in any woodwork shop, garage or storage, these tools are versatile and they are also known to be relatively cheap compared to other power tools. If you are into carpentry, you might one way or the other have seen a circular saw.

The first circular saws were invented in the 18th century and have been in use from the late 18th century until the middle of the 19th century by most sawmills in the United States. The blade of a circular saw is specially designed to cutting a particular material such as wood and in woodwork, this tool is used to make cross-cuts, rip-cuts or sometimes both at the same time. Circular saws are sometimes powered by gasoline and hydraulic motor but mostly by electricity. Let’s take a look at the pros and cons of a circular saw. 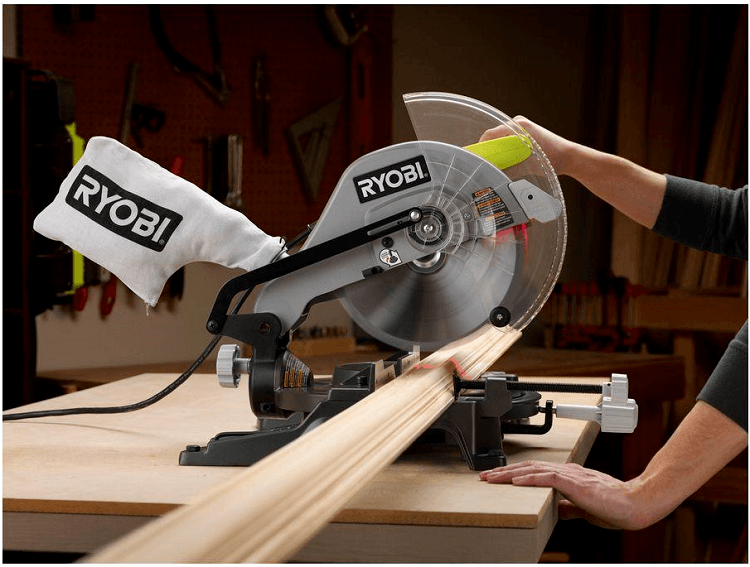 Miter saws just like the name implies are designed to make accurate miter cuts at a required angle as well as crosscuts on woods. Sometimes, miter saws are used to make bevel cuts or a combination of both. Professionals use this saw to make a miter (a term given to cuts made at any angle other than 90 degrees) on a work-piece by pulling a circular saw blade or a large backsaw down unto a board in a very quick motion.

These types of power tools are often referred to as drop saws. They are commonly used to cut molding and trim. Invented in 1964, most miter saws are portable and relatively small in size with blade size ranging from 8 to 12 inches. Due to the invention of the miter saw, this power tool showcased and inspired various innovations adapted in the woodwork industry like blade breaking, radial arc spring action and most importantly, dust collection. Now let’s take a look at its pros and cons.

If by any reason you require to choose one over the other, I would also advise that you go for the circular saw first since it is one of the most versatile power tools anyone can have in a wood shop. You can check out our review of the best circular saws and also their various types to make your decision.